The First International Forum on the Role of Women Notaries in the 21st century, convened by UINL President, Not. Dra. Cristina N. ARMELLA, first woman to be elected President of this international organization, concluded on 8 March 2022 on the occasion of International Women’s Day.

After two working sessions to study the role of women notaries on four major themes related to the notarial function (ethical values, training, human rights, leadership), a closing webinar presented to the more than 300 registered notaries, women and men, from the UINL the good practices revealed by the discussions.

The ethical values of equality, merit and respect were first highlighted by Adriana CUELLAR (Colombia). The validation of legal acts protecting women in the context of legal security requires, in addition to the active participation of (women) notaries, a moral vocation, a sense of empathy and service, all in a protected working environment.

Continuing education is considered to be a crucial point for the involvement of women in the notarial function. The reinforcement of exchange frameworks between colleagues from all over the world and the participation of women in international training courses were favored by Régine DOOH COLLINS (Cameroon). Also, women notaries are encouraged to play a leading role in Universities and in political life.

Legal certainty as a guarantor of freedom is crucial for the respect of human dignity and equality, as Almudena CASTRO-GIRONA (Spain) pointed out. Notaries are the cornerstone of preventive legal security. They receive and advise all citizens without distinction, supporting them institutionally in their decision-making. The training of notaries, the information of people in vulnerable situations and the promotion of new legislation are the three pillars of positive action recommended in favor of the principle of equality, and of human rights in general.

In addition, Prita SUYUDI (Indonesia) highlighted the opportunities to be seized, particularly in the context of the development of new technologies and the widespread dissemination of information, for women notaries to assume leadership functions within their Notariats and their communities, thus enabling other women notaries to empower themselves, while reminding that silent violence due to gender stereotypes still persists.

The men representatives of the Forum (Abdelhamid ACHITE-HENNI, Algeria; Lionel GALLIEZ, France; Hideo TAKASAKI, Japan; Guillermo ESCAMILLA, Mexico) recalled that the inclusive work of women and men notaries is essential to guarantee real and effective equality in the notarial function, on the one hand, and for the citizens it serves, on the other hand. They expressed their wish to make this forum a lasting and even broader event, in collaboration with other international organizations working on the transversal issue of gender equality. 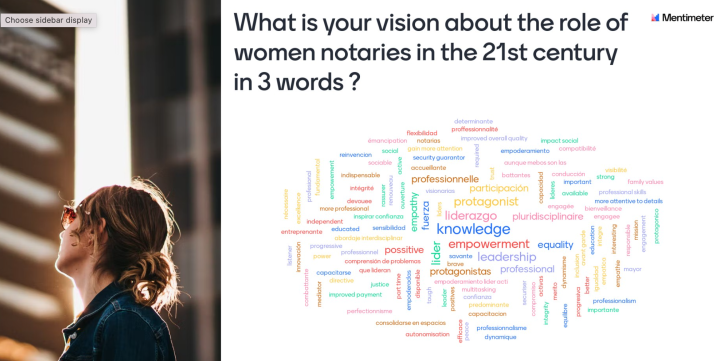 Besides, several international organizations intervened throughout the Forum. FAO (Rumyana TONCHOVSKA) presented the field results obtained following missions on the promotion of land control and ownership by women in the Balkans. The project as a whole was presented during the session of 8 March by Lovro TOMASIC (Germany).
The Hague Conference on Private International Law (HCCH – Nietta KEANE) recalled the essential role of notaries in the protection of adults, especially the elderly, the majority of whom are women.
UNICEF (Anne de MATHAREL) explained their actions in the benefit of girls and the importance of donations and legacies, usually made before a notary, for the realization of their projects.

Judge Paula Maria GARCIA VILLEGAS SANCHEZ CORDERO (Mexico) concluded on the optimistic note of the significant progress already made for self-determination by previous generations of women. She nevertheless deplored the violence, both visible and hidden, that still exists against women and called for no reverse gender stereotyping of boys and adolescents. She also praised the importance of notaries as advisors.

Finally, the President closed the Forum with wishes for world peace and the establishment of a new working group within UINL entitled “Women and Men Notaries of the 21st Century for the Development and Protection of Women’s Rights”, which will be responsible for reflecting on ways to achieve de facto gender equality and to make visible and rethink the role of the Notariat in this area.

To watch or replay the webinars of the International Forum on the Role of Women Notaries in the 21st century, please visit the UINL e-learning platform in the coming days.